Recordings / The Internet is Dumb / Throwback

Chomping at the bit for the release of my new album Modern Life is Awesome on August 28th? Want to whet your appetite with some vintage Tyler jokes in the meantime? Of course you probably don’t, but I’ve got news either way! Head on over to the iTunes store and check out my first album Yeah, I’ve Thought This Through, which I decided to put in there seven years too late. Maybe some of the people who find MLIA in there will buy YITTT as some kind of digital impulse item. 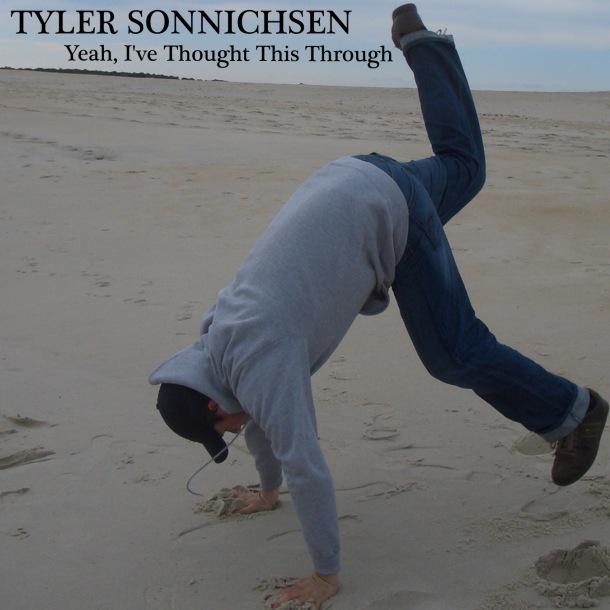 Here’s a quick backstory on Yeah, I’ve Thought This Through, since this website didn’t exist when I released it. I recorded it at the Electric Maid in Takoma Park, MD (essentially Washington, DC) before I moved away in 2011. Kirk Walterick did the engineering, and I released it via Bandcamp and CD in September 2011. I moved to Long Beach right before releasing it, so I wasn’t really able to tour it, but plenty of people “bought” the digital version (I posted it as Pay-What-You-Want, since I didn’t feel confident enough to charge famous-person prices for my first proper release). The original title was You Gotta Fight to be #1 in Everything, but I scrapped that because the # character would be hell across digital platforms. The cover photo was taken by my friend Lauren Owens on a trip to Assateague Island, and the voice introducing me at the beginning was my friend Evan Valentine, who is now married to Lauren. The show also featured the insanely smart and funny Jake Young, Keith Irvin, and Anupama Pillalamarri.

Also, as much as I’ve outgrown a lot of the material presented on here, I’m still pretty proud of this recording. So, take that for what it’s worth.

Like any self-respecting comic with a parallel career that earns me 99.999% of my income, I take my sweet-ass time between albums. I didn’t want to record the follow-up until everything was good and ready, and trust me when I say that I’m very proud of the results in progress. From what I understand, the cassette version of MLIA should be available at the Sugar Mama’s show on the 25th, and the vinyl will be available at various local and regional record shops (to be announced here soon).

"Tell me again what the body's for, cause I can't feel it anymore..." ___________ #nowspinning THE PAINS OF BEING PURE AT HEART - 'BELONG' (2011, @slumberlandrecords) ___________ [To be read à la Godfrey Jones apologizing on 'Rock Bottom'] Sometimes in our mad pursuit of generating quality content for dozens of likes, we here at Tyler's Obnoxious Music Collecting Instagram Account sometimes... make mistakes. We would like to apologize for the following oversight: this album came out in 2011 and has at least two candidates for Top-60 tracks, if not possibly sneaking into his top 10 albums list, see, Tyler forgot it came out this decade until just recently. Maybe he conflated it with their first album, which dropped in '09, we don't know. What really matters is, that TPOBPAH, despite having a name that clearly started out as a joke but they didn't change in time to become famous, were crucial in establishing Slumberland as a righteous tune factory for the 21st century. Was this better than their self-titled? Sure, why not. [Btw, I missed the boat on the #springfieldvinylchallenge, but I'm gonna give it a shot starting next week, because rules? There are no rules, and your manager says for you to shut up!] ___________ Top Tracks: 1. "Belong" 2. "My Terrible Friend" 3. "Anne with an E" ___________ #thepainsofbeingpureatheart #belong #whitevinyl #slumberland @kipberman #kipberman #brooklynband #peggywang #indierock #beautifulmusic #vinyligclub #vinylcollection #vinyl #recordoftheday #c86worship #myterriblefriend #turntable #33rpm #indie #brooklyn #recordcollection #homerbadman #simpsonsreference
CRASS - 'PENIS ENVY' (1981, Crass Records) #nowlistening _________ Every time I finish listening to this record, I feel like I've just blacked out, come to, and the patriarchy's been dismantled. Sadly, that's never really worked, and these songs are just as relevant now as they were 40 years ago, but it's still a nasty masterpiece (nasterpiece?) and essential listening. Eve Libertine takes the keys from Steve Ignorant, and everyone steps up their game. Even Penny Rimbaud gets major creativity points for mixing it up on the drums. John Loder still being John Loder, of course (#genius) makes this sound like nothing else. Oh, and this pressing also includes "Our Wedding" as an unlisted track, and BOY IS IT UNSETTLING. ___________ Top Tracks: 1. "Poison in a Pretty Pill" 2. "Where Next Columbus?" 3. "Bata Motel" ___________ #crass #evelibertine #penisenvy #crassrecords #anarchistpunk #anarchyandpeace #feminism #anarchopunk #pennyrimbaud #fuckthepatriarchy #33rpm #turntable #vinylcollection #vinyl #punkrecords #classicpunk #artpunk #essex #gender
"I know what I want to do; I'll take it on the chin for you!" __________ CHIXDIGGIT - S/T (1996, @subpop) ___________ Tonight I played my first organized, full-pads hockey game in... 15 years? Yes I'm sore and I sucked, but I'm kind of elated. So I decided to celebrate my return to Canada's national sport by pulling out a quite Canadian band...nay, the MOST Canadian band*! Not only does this kick ass (I don't make the devil horns for just any record), this may also be the least pretentious record ever made. They have a song called "I Wanna Hump You," for crying out loud. And it's GOOD. Also, on at least 5 occasions, @kjchix yells out "Let's rock," and his band mates proceed to make that shit happen. This rules, and I'm never gonna let the world forget what a favorable review @pitchfork gave this album, which they then scrubbed it from their website because they're cowards! Also, THIS CAME OUT ON SUB POP. Yeah, let that sink in with your underwhelming singles club subscription!! 🙊💅 awww that's right; the toilet seat's coming down, jerks (whatever that means) 🚽 . Oh! I also learned what the Coquihalla was from this thing 🌄🗻🚐 so, thanks for the 🇨🇦 geography lesson. One of many this band has in their catalog. *No disrespect to Rush, who are true legends but I own none of their records. RIP Neil Peart. __________ Top Tracks: 1. "Where's your Mom?" 2. "Hemp Hemp Hooray" 3. "Stacked Like That" ___________ #chixdiggit #subpop #calgary #poppunk #alberta #canadianmusic #canadarocks #hemphemphooray #kjjansen #powerpop #vinylcollection #punkvinyl #vinyllovers #turntable #33rpm #vinyligclub #vinylcollectionpost #🏒 #recordoftheday #powerchords #wheresyourmom #letsrock #henryrollinsisnofun #323 #gerrycheevers #vinylrecords #vinyl #ogpressing #coquihalla