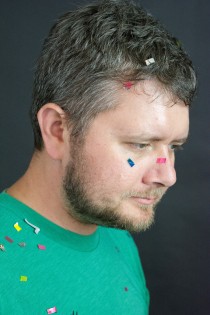 Photo by Tonya Cinnamon. Right-click to download it; it’s hi-res!

SHORT BIO
Tyler Sonnichsen is a stand-up comic and geographer based in Central Michigan. You don’t have to know who Night Ranger is to find him funny, but it can’t hurt. He released his second album Modern Life is Awesome (available at tylersonic.bandcamp.com) in Fall 2018.

LONGER BIO
Tyler began comedy at an early age, then began something resembling actual comedy at a slightly older age as a member of the Western-MA based TDC crew. He joined the Penguins Without Pants sketch comedy troupe in Syracuse, NY in 2001, writing, acting, and producing shows of various sizes through 2005, when he moved to Washington, DC and stumbled upon an open mic somewhere on the Orange Line. He lived and loved DC comedy for years, founding the smash hit Laughing Lizard Comedy Showcase (2006 – 2008), and then founded the Hot Broth Comedy Open Mic Thursdays at the Comedy Spot (2009 – 2016), leaving behind some sort of legacy.

He spent six years in Knoxville, TN, where he spent two years as co-producer of RainShine Comedy and currently co-produces Friendlytown, a weekly world-building experimental comedy show. He recently released his second album Modern Life is Awesome on vinyl, cassette, and digital through his label RainShine Records. He currently resides in Central Michigan.

Also, his name is pronounced like Sonic-Sun. He’s highly enjoyable to watch, really. You don’t have to know who Night Ranger is to find him funny, but it doesn’t hurt. Just remember that Tyler is much funnier than this bio is well-written.

Inside of Knoxville.com refers to me as “Excellent”