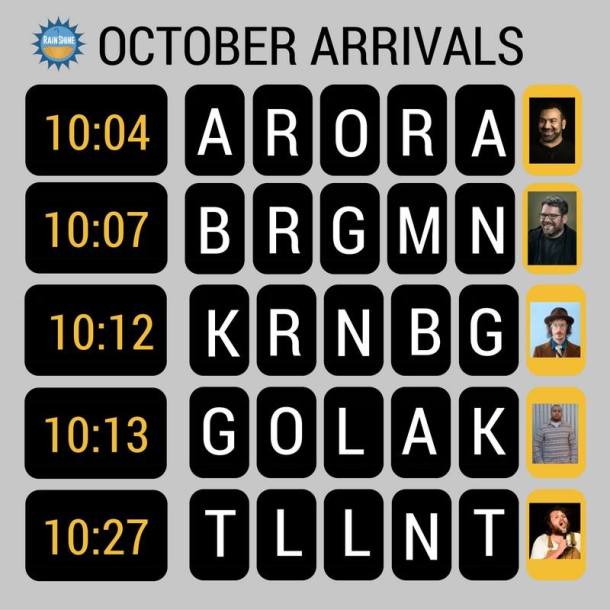 I jumped the gun a little bit on that U2 thing with my personal dates. Honestly, I’m just a tiny piece of this puzzle here in Knoxville. I mean, the POP CULTURE MIXTAPE show at the Pilot Light next Wednesday 10/5 is going to be great (flyer by BOSTON MCCOWN coming soon) and you should seriously plan to check that out, but I’d be remiss if I didn’t also plug the fact that RainShine has BEN KRONBERG coming to the Central Collective on October 12th (yes, that BEN KRONBERG from Last Comic Standing who basically declared war on Roseanna!). Tickets are now available, and we can’t wait to see you all there.

As SHANE RHYNE’s handy/ingenius train/flight ticker sign above shows, there are so many great comics coming through Knoxville this month I don’t even know where to begin. You can check out the Rainshine website for a more detailed schedule, or just keep reading.

Tuesday, October 4th – 7pm – Casual Pint, Hardin Valley – Facebook
MO ARORA (our favorite Canuck based in Atlanta) will be making his return to Casual Comedy at the Casual Pint. The last time he came, he nearly blew the roof off the place and was phenomenal. Also, nicest person you’d ever meet. NATASHA FERRIER (Nooga) is featuring, with TODD LEWIS and DEBBY JOHNSON appearing as well.

Friday, October 7th – 7pm – Saw Works Brewing Company – Facebook
KEITH BERGMAN and SAM RAGER bring their “Pittin’ Out” comedy tour to Saw Works, and we’re incredibly excited. I got to meet and perform with Keith and Sam at Whiskey Bear in May, and boy am I excited that they’re finally coming to Knoxville! Per usual, get there early to grab decent seats. JAY KENDRICK and LANCE ADAMS will feature and SEAN SIMONEAU hosts. 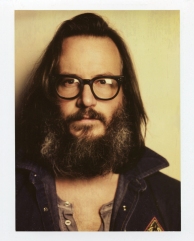 Wednesday, October 12th – 8pm – The Central Collective – TICKETS
BEN KRONBERG, who has a Comedy Central Special, and has appeared a whole variety of late-night shows and Last Comic Standing, will be returning to Knoxville for the first of what we’re hoping will be regular comedy night at Central Collective. His last time in town came a couple years ago on tour with Nick Thune and Kate Berlant at the Pilot Light. Advance tickets are on sale now for $15, and don’t hesitate to pick them up since seating is limited!

Thursday, October 13th – 8pm – Pizza Hoss (Powell) – Facebook
JUSTIN GOLAK, whose jokes are so funny and incisive they will move your brain, will be paying us a visit from Chicago! GREG BEHRENS from Atlanta will also be stopping through to feature. This is going to be another night to remember. MICHAEL SHIBLEY and BRYCE HOUSEAL will be appearing in guest spots. 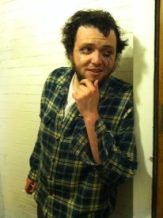 Thursday, October 27th – 8pm – Sugar Mama’s – Facebook
Denver’s SAM TALLENT will be headlining, which alone should already be making you circle the date on your calendar. Sam headlined a riverboat cruise show in 2014, and nearly sank the thing. He even walked out onto the bow while telling jokes into a wireless microphone. Truly, as the Denver Post called him “the surreal voice of an absurd generation” or something. It was easily one of the funniest shows I’ve seen in my three years of living in Knoxville, and I’ve seen some goddamned funny shows. NORM DE PLUME from Pensacola will be in town and appearing as well, and SEAN SIMONEAU is hosting.

Phew. Mark your calendars, share this blog post (if you please), and shout out to Maximumrocknroll for standardizing (or at least, stealing and standardizing, whichever is more accurate) the practice of capitalizing all band and artist names in their articles and scene reports.