Knox Comedy / Music is None of my Business

I’ll be performing (2WICE) in the first annual Second Bell Music Festival on Saturday! You can see Friendlytown at 5:45 pm at the Nothing Too Fancy Stage (inside of Everything Mushrooms at 1004 Sevier Ave), and then I’ll be performing in the stand-up showcase that begins at 6:45. The music schedule (which I hope to check out some of) is posted over at the Festival’s website. Full-day passes are only $30, and tickets just to check out the Fringe Show on the NTF Stage are only $5. 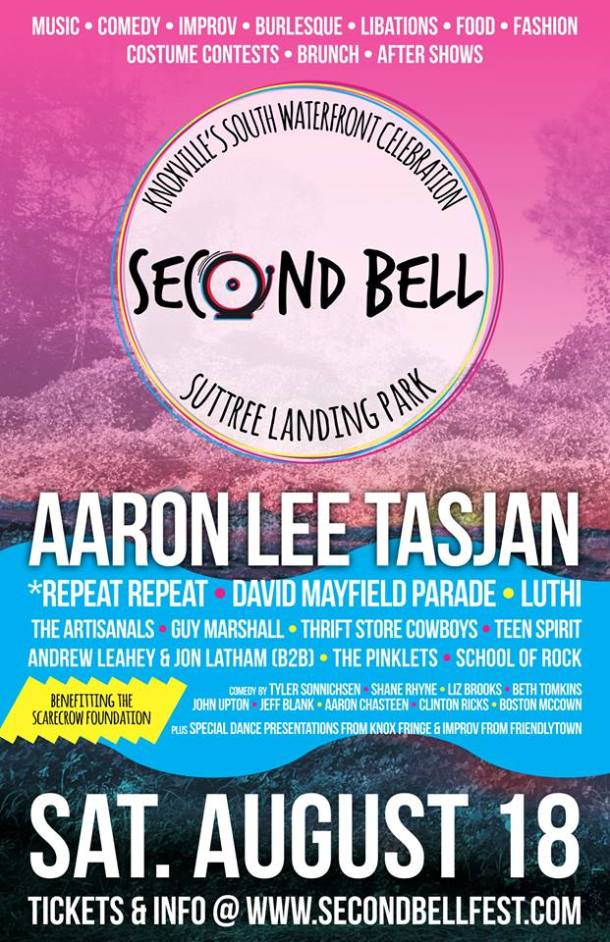 Some of you may remember Blank Fest, which was a one-night (I think it was one) that happened over move-back-in weekend for UTK in Market Square. This year, the rechristened Second Bell Festival is happening down at Suttree Landing in South Knoxville. Zach Fallon, the festival’s Fringe Stage Coordinator, invited me to co-host a Facebook Live video on Monday to announce the performing order. I didn’t divulge a whole lot about the madness that Friendlytown will be unleashing, but our good friend Sargent S. Laughter will be involved.

Also, in case you didn’t feel like sitting through all 33 minutes of that, the stand-up order will be:

I’m extremely humbled to be asked to perform as part of this festival (in both incarnations) for my fourth straight year. It’s been a blast all three times so far, and I’m looking forward to the new challenge and new venue in South Knoxville. Come to think of it, I can’t remember if I’ve ever actually performed in SoKno (as the city is forcing us to call it). I never made it to the short-lived mic at Moody’s, and… yeah, I’m just gonna hit “publish” fairly certain I’ve never performed on the other side of the Tennessee assuming that’s accurate.

Hope you can come out on Saturday, Knoxville.

New profile picture. I used the Slumber filter. 📷 by @blahblahclintonricks
Everything in Twos! The Sidekicks in-store gig at Used Kids' former location, Columbus, OH, 05.09.2015. #thesidekicks #columbusohio #cbus #cbusmusic #usedkidsrecords #instore #sceneinbetween #ohiopunk #powerpop #alternativerock #indierock @prince_of_peeth @614magazine #asseenincolumbus #summerbringsyouclosertosatan#helliswarm #everythingintwos
I recently read @peteramescarlin book about Brian Wilson, which got me on a big Beach Boys kick, because it brought a lot about the project's weird history to light. First, "The Beach Boys," as Boomer-written rock history remembers them, existed for a couple of years. That 1964 concert was the culmination and termination of the "classic" lineup. Second, these two cheap older gatefold releases are shining examples of how the industry suits refused to accept that reality and squeezed every drop they could out of them. Also, the band themselves seemed fairly complicit (or just coked out of their minds). There's no way to say "Hey, we know people aren't going to care about this new Carl Wilson (or something) record, so let's tack on that record everyone now loves and someone totally shit the bed on promoting back in '66!" or "Hey, here's a bunch of Beach Boys songs oh and also the full 1964 live record want a bump?" like these two... things. 'High Water' was a blatant cash grab, and the Carl & The Passions/Pet Sounds thing was... I just don't know. C&TP isn't even that bad! But I *did* buy it for a backup copy of 'Pet Sounds,' so let's call it for what it is. One thing I now realize is that (other than Dennis...and Ricky and Blondie, I guess) nobody in that band looked anything like they belonged in a band, and that's pretty cool. And how has Mike Love always looked 50? I have so many questions. #thebeachboys #Beachboys #petsounds #brotherrecords #Brianwilson #carlandthepassions #carlwilson #gatefoldvinyl #vinylcollection #vinylcompilation #vinyl #cashgrab #rickyfataar #denniswilson #nowspinning #vinyligclub #goodvibrations