Now, I’m not the authority on comedy shows are going down in Knoxville, but I’d be remiss if I didn’t post something here to officially let you all know these were happening from my own digital mouth. Also, I’m either performing in all of these, had a major hand in producing them, or some combination of the two.

First, tomorrow night is the two-year anniversary of First Friday Comedy at Saw Works Brewing Company. Even we at Rain Shine find this hard to believe. Wait a minute; we have a supportive host establishment that helps us promote these things, a wonderful loyal audience, and a roster of solid-gold headliner/features that have graced our little Chadourne ® stage. We probably should be so astounded that the show has made it this far given all those factors, but… we’re programmed to be astounded whenever a comedy show outlives its life expectancy of like 8 months (or one football season in the South).

Anyway, for the special occasion, we got Derek Sheen for you. He’ll be doing an extended set of hi-octane jokes that his fans have seen all over the Northwest as he’s been opening for Patton Oswalt and elsewhere touring with Brian Posehn. He’ll also be (hopefully) selling some copies of his latest LP Tiny Idiot. Rounding out the evening are Shane Rhyne and myself. The Facebook event is here and the poster is below, along with all 23 other Saw Works posters I’ve made with my negligible professional graphic design experience. 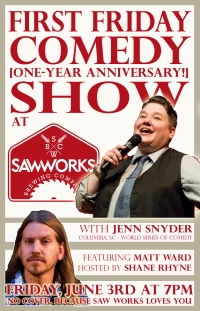 This was our only show we’ve had to cancel due to snow, and it still tears us up inside because it would have ruled. 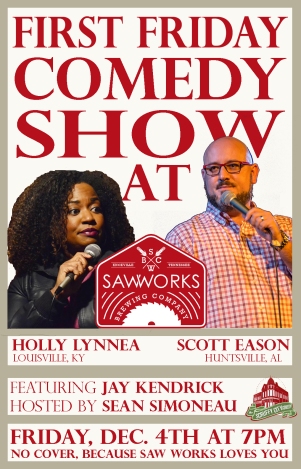 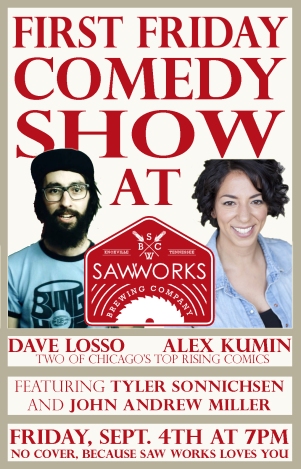 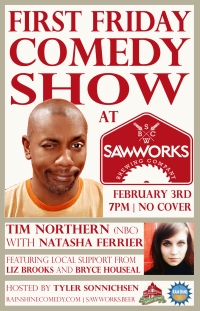 Jenn Snyder, a veritable hurricane of funny, is coming back to Knoxville! Originally, this show was in Sevierville, but its original venue decided, like many venues that have graciously hosted comedy in Eastern Tennessee over the past few years, that letting a show grow over the high-volume summer season didn’t make sense. So, our good friends at Modern Studio threw Gail Grantham a life preserver for this event and agreed to host it! Shane and I will both be doing opening spots, so if you can’t make it to First Friday, then come check this out. Or better yet, do both. No really, come to both. This isn’t a Sophie’s choice you have to make. Derek and Jenn are both pretty much unmissable. Here is the Facebook event with more information about time and tickets, which are $4 in advance and $8 at the door.

We, the noble people of Friendlytown, have allocated our June 5th meeting time to the good people of Austin and Memphis, respectively. JT Habersaat will be bringing the Altercation Punk Comedy Tour back to the Pilot Light with special guest Josh McClane. Also performing on the show will be Jaxx Porter and JC Ratliff! Hosting will be everyone’s favorite, Saint Thomas Ledoux. Join me, won’t you?

Okay that’s enough. You’re all smart adults who can make your own decisions. If you can’t wait until tomorrow night, you can check out the latest LIVE edition of Krish Mohan’s Taboo Table Talk podcast, on which I had lots of fun as a guest.