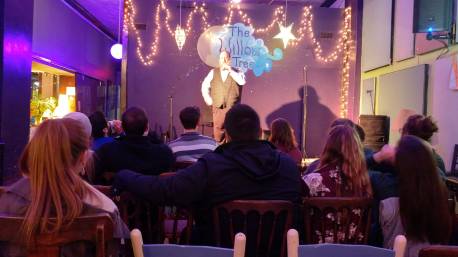 Well, that was fun on Monday, me getting deposed from Friendlytown and then Table Mayor telling the FT City Council what-for. If you’re just a casual fan or someone who doesn’t know me, I don’t expect that first sentence to make any sense, it’s fine.

What was also an insane amount of fun was doing a show up in Johnson City last night with Shane Rhyne, Sean Simoneau, and Rowan Young. The crowd was huge, laughing, and so, so nice. Thanks to Courtland Welch for making that happen, and thanks to JC for being such a cool little mountainside hamlet that was a solid 15 degrees colder than Knoxville. There was also a woman in the audience (who happened to be from Knoxville originally) with a service dog who had a mohawk (see above).

So, Shane and I are hitting the road tomorrow for a couple of days in his home time zone of CENTRAL. It’s a bizarre trip for me, dwelling (one hour) in the past like that, but I’m excited to see what these shows have to offer.

I know  I’ve gone on record saying that “clean comedy” is for sociopaths, but don’t worry – this will be great! Hope these 13 year olds like my jokes about the Situationist International!! Early 7pm start time so you’ll have plenty of time to go out and catch the newest R-rated movie afterwards or enjoy some good parental-advisory-sticker music! Get cheaper advanced tickets here.

… at the Cobra Lounge! I’ve been hearing tale of this place for a while, and I can’t wait to check it out.  Shane and I will be closing it out/featuring/whatever setup they have for out-of-town guests. See you Sunday, pocket of Nashville with actual culture left in it! 7:30pm start time.

Oh, and I’ll have copies of Modern Life is Awesome on LP or cassette at both shows.