Music is None of my Business / On the Road / Podcasting 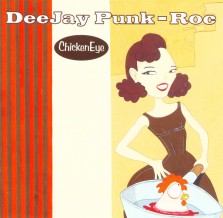 I was preparing an Instagram post dedicated to the absolutely killer DEEJAY PUNK-ROC album “ChickenEye” (because I’m one of those boring fucks with a feed that’s 98% pictures of his cat or of his record collection when he’s not performing/on tour), and I went to his Discogs page to try to remind myself who he was. There’s a simple magic to listening to a piece of music while having no fucking clue who created it. That was the charm of the tape-trading era, when if somebody handed you a cassette with no labels or information written on it, you were screwed. I embraced it, though, and most of those “mystery bands” have come back around for me in the internet era. Anyway, I found out for the first time, twenty years after becoming a fan (not a very good one, I guess) that he/they (it was supposedly more than one person in some capacity… I dunno), that there was a second DJPR album in 2000 called “Spoiling It for Everyone.” Looking at the artwork, it features a cartoon of a little black kid in a dunce cap, further distorting the reality of who the author was (it was a white guy from Liverpool named Jon Davies, who is apparently a successful software engineer today). Also, it looks like the second album didn’t get American distribution, so I feel slightly less guilty about never knowing it existed. Moving on-

I thought I would take this quiet, cold, rainy Friday afternoon to put up a bit of a housekeeping post here. I’ve been working to confirm some dates next month in the Midwest and Northeast, and I’ll post those in a formal announcement in a couple weeks. In the meantime, I’ve got a few shows coming up this month that I’m very excited about. I’ll make a fun infographic with the details to post here soon because nobody pays attention to actual text unless it’s in some editorial on Slate that supports their worldview, but I’m heading to Atlanta with SHANE RHYNE next Friday to do WONDERCOMEDY in DAVID PERDUE and MANDAL (who are both incredible). That’s at the Cabbagetown Community Center at 9pm. From there, I’m heading to the West Coast for a few. I’ll be in Los Angeles on Monday, where I’ll be performing in IF YOU BUILD IT at UCB Sunset (8:30; Tickets Here) and then at 1739 PUBLIC HOUSE in nearby Los Feliz (10:00). I can’t wait to be back in the land of danger dogs and the San Pedro Omelette & Waffle Shop.

Otherwise, I’ve been laying low while awaiting my records to arrive from the plant (it’s agonizing and Record Store Day can suck it). FRIENDLYTOWN has been consistently incredible due to the efforts of the variety of Mayors new and old. Every week I’m in awe of the creativity of that crew of misfits. Make sure to follow that page for updates on great shows coming up, including a $5 Comedy Night special this Monday with The Altercation Punk Comedy Tour (JT Habersaat & Brian Zeolla), featuring Sean Simoneau, Drew Harper, and (host) Emaleigh Gwin.

Speaking of FRIENDLYTOWN, you may have noticed that I’m no longer hosting the episodes of FRIENDLYTOWN RADIO on this site. This is by design, as St. Thomas, the other Mayors, and I were very excited to announce our podcast getting picked up by the SCRUFFY AUDIO NETWORK. Special thanks to Forrest at Auralation for helping facilitate that. To be honest, I had plans to make a big announcement when the handover took place, but the process was so smooth and I was so busy with work and life stuff that outside of verbal announcements at the show and one or two quick posts via Facebook, nobody really noticed. As I said after an episode of the show last month, we’re very excited about this new era of Friendlytown. The Scruffy Audio Network is a great little group of podcasts (I’ve already had the pleasure of being a guest on a couple, including a recent Talk Stranger episode) focused on very eclectic corners of Knoxville culture. Also, being on the Scruffy Audio Network has enabled us to get Friendlytown Radio onto Stitcher and Spotify in addition to iTunes, the latter of which most people can agree has shat the bed significantly these past couple of years. Also, Friendlytown Radio got an official website here, where you can listen to any old episode. If you’re unfamiliar with the show, I’d recommend checking out “Friendlytown’s 2nd Goddamniversary!” But there’s no typical FT show, so they’re all different and each episode has plenty of great moments. Anyway, recording and post-production is still happening mostly in-house with St. Thomas. I think the decision to record and podcast our shows was one of the best decisions me and the other producers made early on, and I’m grateful St. Thomas picked up the mantel on that initially (mostly because I was seriously dragging ass on the process, and I don’t really have any proper audio editing equipment. Small details).

Alright! Have a nice weekend, everyone. I think I might have burnt my tongue on this tea. Time to take more pictures of records and cats.