Mark + BK + Sara + Rollin + Josh = Full Disclosure. I stole this image from their Official Facebook Page and I don’t feel guilty one bit. 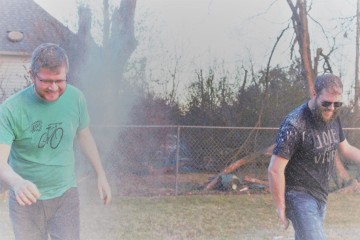 Come on out to Modern Studio tonight at 8 in Happy Holler to see me and Sean Simoneau make a special appearance opening for Full Disclosure Comedy. Haven’t I written about Full Disclosure here? They are a long-form improv troupe that, since last year, have included Josh Lampley (Friendlytown). Though I’ve known them personally for a few years now and through a couple incarnations, this will be my first time  actually performing with them. I think. The time I introduced them at Market Square stage doesn’t count. Either way, I’m looking forward to it. This will also be the only proper “preview” show Sean and I have for the Sonic-Simon 2018 tour. Here’s the Facebook event with more info, you plebs. Did I mention it’s ostensibly free? And they have a steady stash of beer for the people?

And while I have your attention, come to Pilot Light on Saturday at 7pm to see a great evening of stand-up from the first LGBT lineup to grace the stage in some time! Lisa Michaels (Memphis), Katrina Coleman (Memphis, too) and Mary Jay Berger (Nashville) will be visiting, and newcomer Joel Palilla will be making with the hilarious. St. Thomas LeDoux hosts, and it’s 18+ with a $5 cover. You know, like a categorically amazing deal! Find more details here. xoxo