A quick note to tell anybody within 100 miles of Knoxville (that’s a good, round number) to come and check out the live comedy-carnage that will be 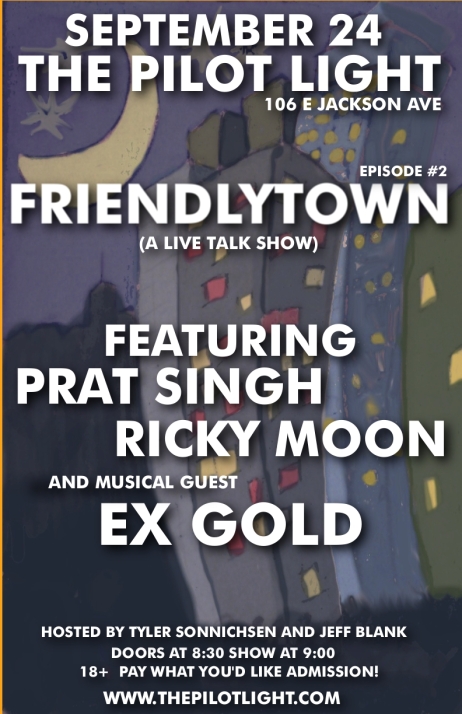 The first one, while we learned a lot in the process and didn’t have much time to promote it, was a hell of a good time. This one, however… I can’t even begin explaining how insane this is shaping up to be.

There is NO ‘bio’ on me because I don’t really know what I’m doing, so i float like a butterfly Singh like bee.

I imagine that Prat is routinely asked if she ever sleeps ever. She is the co-founder of RUCKUS, an indie-as-fuck culture journal, a major player in the Knoxville Pallet House project, host of “THE PRAT CAVE” on WUTK-FM, and if asked nicely, she will help you organize your mess of a life. Maybe she can help me and Jeff out.

Jeff and I ran into an old associate of his, who, upon hearing that Ricky Moon was going to be our guest this Wednesday, told us a highly plausible urban legend that Ricky Moon once made John Waters turn his head and slow his pace. JOHN WATERS. That’s all you need to know about Ricky Moon if you don’t already know him, which you most likely do if you live in Knoxville. The man is a local legend and will probably call you something with “sugar” in the title.

Sam and Chris play in a band called Royal Bangs, who are great, despite the fact that Pitchfork likes them. This is their awesome-noise side project that may just melt your face off. They’re also wicked funny guys and integral parts of the local arts scene, so don’t miss the chance to see them in a super rare musicomedy experience.

TELL A FRIEND TO COME ON DOWN TO FRIENDLYTOWN!

One thought on “FRIENDLYTOWN Episode 2, This Wednesday!!”